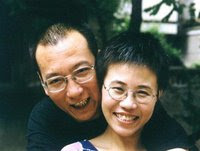 As you know, Liu Xiaobo has recently been awarded the Nobel Peace Prize. Already in 2009, Liu
Xiaobo was sentenced to 11 years of imprisonment for peacefully expressing his political opinions.
Following the Nobel award and a visit to her imprisoned husband, Liu’s wife was placed under
house arrest, a clear case of kin liability or collective punishment which reminds us some of the
darkest hours our continent has seen.

We are very concerned about this development. Acclaimed writer, former university teacher has
been active for years in peaceful protest for a better and rightful People’s Republic of China. He has
pushed for democratic reforms since the 1980s, and was a participant in the 1989 protests on
Tiananmen Square in Beijing. He was detained by authorities last year shortly after his
collaboration in the Charter 08 project, a call for legal and political reform which hundreds of other
scholars also signed.

We do not want to interfere with Chinese Internal Affairs, but we have nevertheless the duty to
point out the unfairness and illegalness of the treatment of Liu Xiaobo, his wife and fellow political
activists – detained or “missing” - under the international human rights regime. This persecution of
their peaceful and free expression of a political view is inconsistent with the People of China's
constitution of 1982, too.

We humbly invite you to communicate our concerns to your Government and to voice our request
for an immediate release of Liu Xiaobo and his wife, as well as of fellow political prisoners like Liu
Xianbin, Gao Zhisheng, Tan Zuoren, Hairat Niyaz and Dhondup Wangchen. We do not give up
hope of discovering a positive change in your Governments policy towards the respect of
fundamental human rights and in this case the freedom of expression.