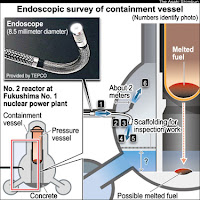 So far only bad news in 2012 around the crippled reactors of Fukushima. (1) Japanese scientists are still baffled about the whereabouts of the nuclear melted core material. The search for the highly radioactive core material is indeed a tricky one. In Chernobyl, the so called "elephant's foot" the congealed and melted portion of reactor material and fuel rods was only discovered months after the reactor catastrophe(2). Experts in Japan are now trying to find the location of the meltdowns by using x-ray technology. However high doses of radiation continue to be measured at the site of the reactor. During an endoscopic video mission when workers inserted a camera into the reactor core, the Olympus camera had tremendous problems to keep the images clear: Radiation was even visible on the film(3), a phenomenon which was also observed in some film reels shot in Chernobyl. The camera used for the "reactor endoscopic" was built to withstand radiation up to 1000Sv. Steam in the containment vessel of the reactor and high radiation levels limited the clarity of the images, but they raise the possibility that melted fuel at the bottom of the vessel may not be adequately covered by water, according to nuclear experts. TEPCO officials had calculated that the water level in the No. 2 reactor was about 4.5 meters, but the endoscope was lowered for inspection work within the reactor about 4 meters from the vessel bottom, and the water level could not be confirmed. TEPCO officials said it appeared likely that the water level was less than 4 meters from the bottom. TEPCO had stated that it believed some of the nuclear fuel in the reactor had melted and fallen to the bottom of the containment vessel, but the endoscope did not capture images of it. A thermometer was attached to the endoscope and recorded a gas temperature near the lower half of the containment vessel of 44.7 degrees.(4) In other news it was the announcing of the Japanese Government to nationalize TEPCO for at least 10 years. While this will definitely insure rapid payments and repairs for the victims of the nuclear disaster, the taxpayers of Japan will be likely the ones to pay in the end for the cleanup of the catastrophe.(5) The European "Stress Tests" overshadowed once again the situation in Japan. As TEPCO and the Japanese government and thousands of workers struggle to get the situation under control, little people outside of Japan do care about the growing insecurity and problems in the region.


The endoscopic camera inside of Fukushima-Daiichi Unit II

Pipes and emergency pipes laid during the first month of the evacuation at the power plant continue to burst under the freezing temperatures. Asahi News reports that:

... Some 7,800 liters of water leaked from a fuel rod storage pool and reactor cooling systems in the disabled Fukushima No. 1 nuclear power plant on Jan. 29 [...] after pipes ruptured because of freezing weather. [...] The leaked water was supplied from a nearby dam to cool reactors and processed radioactive water. [...] Decommissioning the reactors at the facility is expected to take decades. But with problems still occurring even now, it remains uncertain how long the process will take. [...] (5)

Further reports show that even more radioactive water was realeased and more pipes are bursting:
More than 8 tonnes of water have leaked from Japan’s stricken nuclear power plant after a frozen pipe burst inside a reactor buiding [sic] [...] Kyodo, quoting [Tepco], said the water had leaked from the No.4 reactor when a pipe “dropped off” [...] “The total amount of leakage from the reactor was initially estimated to be 6 litres, but the utility revised the figure later Wednesday, adding that the leakage appears to have started at around 5 p.m. (0800 GMT) Monday,” Kyodo said. “The utility plans to check whether there are similar cases in the other crippled reactors,” it added. (6)
Since many of the sources of the bursting pipes are from Tepco, and in regard of their terrible information policy, we might in mind that the reports are falsified and that the real situation is actually worse.

Heart failures, and Growing heart problems in Fukushima area:
More and more news of children and new-born babies who suffer from complex cardiologic complications are reported from Japan. (7) Prof. Busby, analyzed the data comparing them to Dr. Bandazhevskiy's studies of cardiovascular complications of the "Chernobyl children"(8). Unfortunately only few scientists have investigated this phenomenon. This leads to incomplete and unsound statistics and in the end, much more people are affected by health problems caused by radiation.
Prof. Busby explains his findings: