On Saturday 12th, TEPCO granted for the first time access to three dozen Japanese and international journalists, since the disaster in Fukushima-Daiichi NPP. TEPCO's publicity stunt to reassure the international press and public opinion backfires as it leaves more questions then answers. Journalists from Guardian, N.Y Times and the Telegraph report high levels of radiation as they approach the site op the Fukushima-Daiichi 1 Plant and report of skyrocketing radiation levels and chaos.
"Martin Fackler, the New York Times' Tokyo bureau chief, said the site was strewn with piles of rubble virtually untouched since the tsunami struck. He said: "There's debris all around where the reactors are – twisted metal, crumpled trucks, large water tanks that have been dented and bent. "You can see that this stuff has been strewn around and it has not been picked up and it's been there for eight months. "So I think that more than anything is a testament to how difficult a time they've had in trying to get those reactors under control." Radiation levels were still "very high", he told BBC Radio 4's Today programme." The reporters, mostly from the Japanese media, were accompanied by the environment minister, Goshi Hosono, who is in charge of the clean-up operation. They were not allowed near the reactor buildings. "I think it's remarkable that we've come this far," Hosono said. "The situation at the beginning was extremely severe. At least we can say we have overcome the worst." Tokyo Electric Power (Tepco), which runs the plant, has succeeded in bringing down the temperatures at the three damaged reactors from levels considered dangerous. "From the data at the plant that I have seen, there is no doubt that the reactors have been stabilised," Masao Yoshida, the chief of Fukushima Daiichi plant, told the reporters. But while it was now possible for workers to enter the reactor buildings, Yoshida said conditions for those working there remained dangerous. Tepco hopes to complete a "cold shutdown" – when temperatures are stable below boiling point – of the damaged reactors by the end of the year. But Hosono warned it could take more than 30 years to completely decommission the plant. Hiroaki Koide, a nuclear physicist at Kyoto University, said he doubted the decommissioning process will go as smoothly as the government hopes. He said pools for spent fuel remain highly volatile, and cleaning up the three reactor cores that melted down due to a failure of the cooling systems will be a huge challenge. "Nobody knows where exactly the fuel is, or in what condition," he said. "The reactors will have to be entombed in a sarcophagus, with metal plates inserted underneath to keep it watertight. But within 25 to 30 years, when the cement starts decaying, that will have to be entombed in another layer of cement. It's just like Russian Matryoshka dolls, one inside the other." (via guardian.co.uk)

The devastation and power of the explosions of reactor 3 are now revealed as Japanese and International journalists shoot images of it during the 1-hour trip inside the Fukushima complex: The next pictures show Reactor 3 as it is today: crippled and leaking massive amounts of radioactivity.

Fackler continues: "Finally, we got our first proper look at the damaged reactor buildings. No 1 was covered by a new superstructure, No 2 was intact. No 2 was in worst shape: it was a skeletal frame, largely collapsed into a pile of rubble. I spotted three cranes clearing up rubble at No 3, in preparation for also capping off that building with a superstructure. No. 4 was also severely damaged. The building was intact, but it had clearly buckled, with concrete slabs blown out. The entire south side of the building was blown out, exposing the green crane for spent fuel rod pool. At this point, around 1,640 feet from the reactors, I stopped to check my radiation reader: 50 microsieverts per hour" Fackler later states that his the instruments showed readings up to 300 mS/h. As a reference a German NPP worker should not be exposed to more than 400 m/S per year meaning that at this hotspot you would get your yearly dosis in little more than an hour. Japanese and International Press remain very skeptical towards the management of the crisis in Fukushima.

Explosions carry radioactive radionuclide far away. Throughout Japan, places of intense radioactivity are discovered, the so called "hotspots". The following reports show how problematic the situation really is, a report by Al Jazzera and a private measurment near Koriyama, 60km away from Fukushima. (Allowed yearly dose in Japan 20mSv/h)

Nov. 7 — “A survey shows that some children in Fukushima Prefecture have smaller average weight gains this year compared to the year before. A pediatrician says the results indicate the negative effects of the nuclear plant accident in March,” reports NHK. “Doctor Shintaro Kikuchi tracked the weights of 245 children aged from 4 to 6 in 2 kindergartens in Koriyama City, Fukushima Prefecture. The results show an average weight increase of 0.81 kilograms over the past year through June. The increase for children in the same age group the previous year was 3.1 kilograms.”
Posted by Philippe Schockweiler at 15:21 Kommentare:

N.B for the English Article scroll down 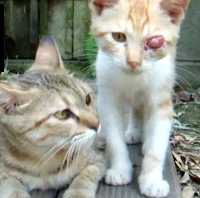 Due to numerous requests, every article I publish on Fukushima will also feature an English translation


8 months after the Fukushima-Daiichi the situation in Japan still worsens: New measurements confirm the presence of Xenon 135 & 133 gazes. Xenon is only generated during nuclear fission, proving thus that there is an uncontrolled nuclear chain reaction going on in at least 2 reactors. On November 2nd, Tepco workers tried to stop the reaction by injection boric acid fluid into the reactor core, but haven't succeeded to cool down or stop the reaction. As the workers still struggle to gain control over the crippled reactors, Japanese pediatricians are very concerned about the rising number of acute leukemia cases and rising number of radiation sickness & poisonings. Dr. Nishio, Director of the Hokkaido Cancer Center is criticizing the Japanese government for not acting "appropriately". Japanese Health officials and the Ministry of Health state that symptoms such as diarrhea, paleness, headaches, swollen lymph notes, nose bleeds are merely signs of colds and not the radiation sickness. Dr. Nishio is renowned pediatrician and knows the subject of children exposed to radioactivity very well: Between 1995 and 2005 he travelled numerous times to the exclusion zone of Chernobyl and studied the effect of radiation on kids. More and more Japanese doctors are talking about swollen eyes, a typical symptom that can be observed when the thyroid has been exposed to huge amounts of radioactivity. (check picture of cat from Fukushima Prefecture) Kittens with swollen eyes in Fukushima Prefecture)
Katze aus der Evakuierungszone zeigen haben angeschwollene Augen, ein akutes Zeichen, dass die Schilddrüse radioakivem Material ausgesetzt ist.

Dr. Nishio from the Hokkaido Cancer Center shares his views:

Posted by Philippe Schockweiler at 23:19 Kommentare: