Putin vs. Medvedev - An Analysis of Russian News Coverage 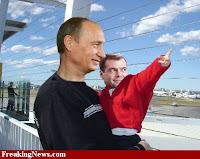 While away on holiday, I had a closer look at Russian television and how both, President Medvedev and P.M Putin are depicted in the Russian state-run television channels:
One trend becomes very very clear even at a first glance: Although Putin is the acting Prime Minister, he still remains the muscle inside the Kremlin. The time of coverage is also very striking. In every 8 o'clock evening news block, P.M Putin gets at least 2 coverages, Medvedev if lucky gets half a report. The state news of August 18th were a striking example:
On August 17th, a truck bomb had killed 30 policemen and a significant number of innocent bystanders during a terrorist attack in Ingushetia. One day after the attack, Pres. Medvedev held a press conference in his summer residence in Sotchi: sunny side-up sunburnt face, the profile of his sunglasses visible, not that bright of a speaker... all in all a farce ! The report merely featured some extracts of Medvedev's speech, and nothing more. In a 10 second newsflash, Medvedev was shown again receiving the Israeli Pres. Shimon Peres. These two reports lasted for approx. 3-5 minutes.
But now it was time for the big Putin show: Like every August, Moscow holds the big Russian Air Convention and Annual Meeting of Aerospatial Manufactures ("MAKS"). Putin was filmed in every angle and possible pose: First the businessmen: Putin is shown between the C.E.O of a famous Russian Airline and the President of "Sukhoi-Aerospace Cooperation" signing a 545 million-dollar deal over new aircrafts. Hence Putin is depicted as the one who closed the deal. Later the P.M enjoys the aerial acrobatics of the Russian Naval Airforce with Daniel-Craig "bondishness" and cool sunglasses, and congratulates the pilots after their daring performance. The most scaring part follows now, where Putin sits on a table with Georgian War veteran pilots who allegedly destroyed the airport of Gori. Shortly after the terrorist attacks in Ingushetia, this is like a demonstration of force, but not only for Ingushetia, but for Georgia, Daghestan, Chechnya and Ukraine aswell. The report goes on (by the way, now we are already way beyond 10minutes) and shows Putin's head speech of the MAKS, again packed with allusions to the Georgian conflict. The report finishes with Putin once again talking to fighter jet pilots. Although a survey from Novaya Gazeta(probably the last independent Russian Newspaper) shows that over 85 % believe that Medvedev is the strongest man inside the Kremlin, it becomes very clear who is the real power cable behind the scenes.
Most people don't know, but when Putin became P.M, many of the presidential preogatives became transferred to the portofolio of the Prime Minister. This was called by Russian State Media a "reform" but it is nothing more than a further example of Russia in the 21st century, being a "controlled" or "guided" democracy.
Posted by Philippe Schockweiler at 20:41 Kommentare: