For many months now, the first reports, studies and peer reviews have been published on the issue of health effects of the Fukushima-Dai'ichi disaster. Especially children are the most affected of radiation sicknesses and diseases such as thyroid problems, acute cardiovascular diseases, cancers, lumps and irrefutable cell damage, because their immune systems are not fully developed. A study conducted in the Fukushima prefecture on 3375 children showed:


Already last year, in May 2011 Satoshi Tashiro, senior professor of the Hiroshima University had discovered in 550 out of 1100 children's thyroids high and health threatening levels of radiation, up to 0,1 - 0,2 mSv/ h. (2) Regarding the fact that especially children are extremely vulnerable to radiation because their immune system is not yet fully developed and that they are irradiated and exposed to highly radioactive sources of radiation, and contaminated by local food, dust and water, we must unfortunately be ready to predict a high number of children cancers and genetic defects over the next decades, probably worse then Chernobyl. But also unborn life is severely affected by radiation: Examiner.com resumed the risks and threats very well in an article from June 2011:


"In the ultimate nuclear nightmare scenario now unfolding, Japanese local newspapers have attributed sickness in children to Fukushima's nuclear meltdowns, the radioactive levels now elevated throughout eastern Japan. Children over 32 miles from ground zero are suffering fatigue, diarrhea, and nosebleeds, the three most common of eight radiation sickness signs, the three in the earliest stage Tokyo Shinbun newspaper reported that many Japanese children have "inexplicable" symptoms. Each symptom described are among the first experienced with radiation sickness. Japan is dangerously contaminated by radioactivity over a far larger area than previously reported by TEPCO and the central government according to new reports from multiple sources," the Daily Kos reported. The prefectural government of Iwate released new data that shows radioactive contamination of grass exceeds safety standards at a distance of 90 to 125 miles from the damaged Fukushima nuclear power plants. Children become radiated when they drink milk and eat dairy products from cows feeding on radioactive grass, even at low levels according to the world's foremost anti-nuclear campaigner, Dr. Helen Caldicott, and other independent scientists. Radioactive materials concentrate in milk" and many other food products. (5)


Pediatricians around Japan but mostly in a 200km radius around Fukushima report of more and more children attended by radiation sickness and describing the typical symptoms:


" Tomoyuki Yamazaki, a Japanese doctor ... in Wakayama Prefecture in western Japan who provides medical counseling at the information center every month, said in an email to ENInews that an increasing number of children he has seen “have nosebleeds that don’t stop, diarrhea, dark circles under their eyes, and incurable stomatitis [an inflammation of the mucous linings in the mouth]. A growing number of children [at the centre] have pains in their chests.” [...] (6)


The fear and growing rumors of miscarriages have been denied by the government although first analysis and statistics point in a different direction. The University of Fukushima disinforms the public by telling them that currently 28 pregnancies in Fukushima are resulting in a miscarriage out of 100 , but that would be a rather normal number. One third of the pregnancies ending in a miscarriage an this is supposed to be normal? The disinformation these days doesn't seem to know any limits. (7) Another less acadamical but interesting report came from the Morning-TV of AsahiTV. Apparently, mutations are also visible in botanic life: Reporters claimed that many mutations in flowers and plants have occurred and showed images of mutated dandelions. (8) The disinformation from the government takes unprecedented levels of absurdity. Sebastian Pflugbeil, a respected German Nuclear Expert and chairman of the Society for Radiation Protection, visited the Fukushima area and was shocked to find a beauty pageant in Fukushima for the prettiest girl who ate only food from Fukushima area. This pageant was supported and sponsored by the Japanese Ministry of Agriculture. (9) The typical eye-swelling especially in small children has also occured in Fukushima and surrounding areas. Swollen red eyes, as observed in Chernobyl are a typical symptom of thyroid disorder and have been reported in Japan especially by parents whose children played in contaminated sand boxes or playgrounds. (10)


Leukemia cases and fear of Leukemia in Japan is on the rise. A senior Japanese journalist, covering the Fukushima case since march 2011 developed acute lymphocytic leukemia and died after 3 weeks (3). In a recent survey a lot of Japanese people show they are preoccupied about becoming sick and scientist talk about a massive psychotic disorder caused by both the accident and the coverup by Japanese authorities:


"Despite the fact that the Japanese government and TEPCO were caught red-handed underplaying the severity of the Fukushima nuclear crisis, a study has found that almost a quarter of Fukushima residents hospitalized in the aftermath of last year’s devastating earthquake and tsunami were treated as having a “psychiatric disorder” because of their concerns over radiation. The phenomenon of authorities underplaying the threat posed by radiation or even characterizing concerns over it as a mental illness has become a dominant theme since the catastrophe just over a year ago. This is despite the fact that Japanese authorities were caught over and over again lying to cover-up the true scale of the disaster.“Some 24.4 percent of people who were hospitalized in Fukushima with psychiatric disorders in the wake of the outbreak of the crisis at the crippled Fukushima No. 1 Nuclear Power Plant had done so possibly because of fears of radiation exposure, according to the results of research conducted by psychiatrists at Fukushima Medical University,” reports the Mainichi Daily News" (11)


After 13 months, the whole impact of the catastrophe is yet far from being measurable. The fact that still 3 reactors are out of control and 6 spent fuel pools are beyond repair does however predict a rather pessimistic future.

Posted by Philippe Schockweiler at 01:00 Kommentare:

Serious incidents in France and South Korea leave many questions:

On April 5th, 2 fires in reactor 2, in the French Nuclear Power Plant “Penly” provoked a radioactive leak in the primary pumping system releasing 2300 litres of radioactive cooling water per hour. In a first reaction, Bruno Chareyron, senior researcher at the independent nuclear institute CRIRAAD announced that the accident is to be taken very seriously. A serious damage in the primary circuit on the pumping system that allows the reactor to be cooled down is a very serious matter. He asks how is it possible to have a malfunctioning pump with oil leaks, and what is the cause of it? Poor maintenance or low quality material? Furthermore the French Nuclear Safety Agency ASN has not yet commentated on the health state of both firefighters and workers who intervened at the NPP Penly. They can very well protect themselves against radioactive contamination but not against the irradiation from the source. In the case of Penly, regarding the fact that highly radioactive cooling water containing many sorts of radioactive isotopes escaped from the primary system, the irradiation of the workers and firefighters must have heen important. Furthermore the question of the consequences for the environment have not (yet) been addressed by French authorities: EDF, who exploit the NPP Penly reassured that all of the leaking water was caught in special buckets. The question remains how much more these containers could have retained if the leak had not been stopped. These waters will be treated and most probably thrown into the ocean. Knowing that tritium cannot be processed, an important tritium amount will thus be liberated into the Channel. (The nuclear power plant in Penly has already a certificate issued by ASN to drop 72 000 000 000 000 bequerels per year into the Channel) Saying that the impact on the environment is not a risk, is thus a very quick and false conclusion by French authorities. In the next weeks and months it is up to the authorities and also us to check if the tritium readings in the Channel by have substantially risen or not. In another reaction Greenpeace France calls for an immediate stop of all French Nuclear reactors and an urgent petitions EDF and ASN to quickly check all the pumping systems in the “French nuclear park”. The French blog “Le Blog de Fukushima” has published an not really scientific nor representative but yet interesting map of the fallout of Chernobyl and Fukushima applied to Penly. Possible scenarios would imply the evacuation of Bruges, Brussels, London, Eindhoven, Amsterdam, Luxembourg, Paris, or important parts of France's Northern seaboard, South East England or entire countries like Belgium or Luxembourg. 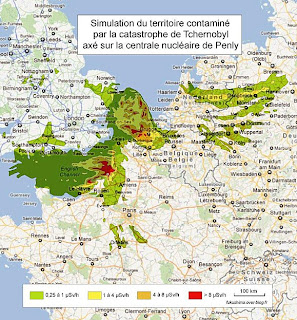 Penly, was without any doubt a very close call. Another near accident happened several weeks ago in the South Korean nuclear power plant in Kori the country's oldest station. The incident itself had been kept in the dark for several weeks before South Korean authorities decided to publish it. On February 9th 2012, the reactor was shut down for inspection. After that, the whole reactor system lost all power and diesel generators failed. The plant was without power for 12 minutes. This is a very serious incident. Electricity failures and problems with energy supply are the most critical events that can happen at a station: No power meaning that neither the reactor can be cooled nor can the chain reaction be controlled. After 12 minutes the electricity in Kori was restored and the workers could stabilize the reactor. One doesn't want to imagine what could have happened in South Korea if the workers hadn't had managed to reestablish the energy supply.

What do these incidents teach us? Especially the incident in Penly shows us that the E.U stress tests did not improve the security of French nuclear power stations. The disastrous state of some plants remain the same. A serious incident seems in France likely and only a matter of time.

Posted by Philippe Schockweiler at 02:14 Kommentare: